The global legal marijuana market is valued at USD 17.7 billion in 2019 and is expected to expand at a significant CAGR of 18.1% over the forecast period. The rise in the legalization of marijuana in various countries is one of the key factors driving market growth. The use of cannabis for medical purposes is gaining momentum worldwide owing to recent legalization in various countries. Medical marijuana is used for the treatment of chronic conditions, such as cancer, arthritis, and neurological conditions, such as anxiety, depression, epilepsy, and Parkinson’s, and Alzheimer’s disease. Such a wide scope of application is anticipated to bode well for the product demand.

The high prevalence of cancer is expected to be one of the factors driving the demand for legal marijuana. For instance, according to the World Health Organization (WHO), cancer is the second leading cause of death in the world and was responsible for about 8.8 million deaths in 2015. In addition, the growing disease burden of chronic pain and significant side effects associated with opioid usage is expected to drive the demand for medical cannabis, which has proved to be a potent product for chronic pain management. 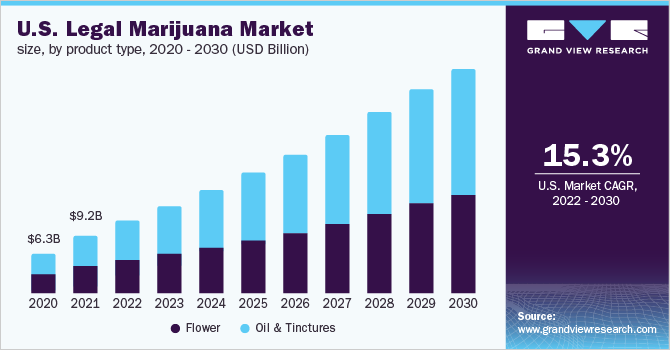 Legalization of medical cannabis and decriminalization in some countries has led to a significant decrease in the black market, as people are resorting to legally purchasing cannabis for medical as well as adult use. Government earnings through taxation are further viewed as an opportunity for countries to earn high revenues. For instance, the total tax revenue collected for the state of California in the U.S. was USD 345.2 million in 2018. Revenue generated from these taxes encourages the local governments to fund several development programs for education and infrastructure.

According to Cannabiz Media, the legal marijuana business is creating jobs and opportunities with around 9,397 licenses in the U.S., including cultivators, manufacturers, dispensaries, and deliverers and labs. Owing to these factors, the legalization of cannabis has led to an increase in its demand in these countries and eventually eroding the black market.

The medical segment held the dominant revenue share of 71.0% in 2019. Medical use of marijuana is strictly categorized as a medicine prescribed by a physician and the distribution of these medicines is regulated by the government. Therefore, the suppliers must maintain mandated quality control on the products. Over the years, the medical application has witnessed tremendous expansion due to the increasing amount of scientific literature, supporting its benefits in the treatment of various diseases. As the number of countries legalizing medical cannabis and its applications is increasing, the market is expected to witness robust growth in the forthcoming years.

By 2027, adult-use is expected to emerge as the fastest-growing segment. Adult-use or recreational cannabis is defined as any use of cannabis apart from medical purposes. Adult-use can range from it being a psychoactive drug to a food ingredient. In many countries that have legalized medical cannabis, its adult-use remains illegal. Few countries like Canada, Uruguay, Colombia, and some states in the U.S. have legalized adult use of cannabis. Through the legalization of recreational cannabis, governments are trying to eradicate the black market and focusing on gaining a substantial amount of tax revenues levied on the sale of these products.

The legalization has propelled the demand from both recreational and medical users. Countries like Canada and the U.S., where adult use of marijuana has been legalized, have witnessed a dynamic shift from patients opting for recreational cannabis instead of medical. This can be attributed to the easy availability, wide variety, and low prices. In countries where reimbursement for medical cannabis is not substantial, this shift in trend is much evidential. Nonetheless, strict regulations and restrictions on the use of recreational cannabis for adult use are restraining market growth. Yet, the launch of the medical marijuana program and cultivation and distribution of the product by the government of various economies is expected to boost the growth in the near future.

Based on product type, the legal marijuana market is segmented into buds, oils, and tinctures. Buds segment is expected to dominate the market in 2019 with a revenue of USD 9.1 billion, while the oil segment is anticipated to witness the fastest growth over the forecast period. Dried buds are generally used for smoking in order to alleviate chronic pain, to reduce the growth of cancer, and to stop the progression of Alzheimer’s disease. Moreover, smoking is much more economical than oral products or tinctures and hence most people prefer smoking it. In addition, the onset of action of smoking marijuana is rapid and is thus preferred.

However, there are various adverse effects of smoking cannabis, which include the production of phlegm, chronic cough, and respiratory diseases such as Chronic Obstructive Pulmonary Disease (COPD), chronic bronchitis among others. In addition, smoking is socially stigmatized and is not preferable for children. These factors are expected to impede the demand for buds in near future.

Cannabis oils are used for the treatment of cancer and nausea and can also be used to improve sleep and to alleviate stress and anxiety. The legality of cannabis oils compared to buds differs from country to country. The demand for oil is on the rise owing to social stigma regarding the smoking of marijuana. Moreover, doctors are not comfortable with patients smoking marijuana as it has potential harmful components such as particles, tar, and other chemicals.

Based on medical applications, the market is broadly categorized into chronic pain, mental disorders, cancer, and others. The chronic pain segment held the dominant revenue share of 43.6% in 2019. The increased need for pain management across the globe coupled with a large patient pool suffering from several chronic illnesses is the key factor driving the growth. According to the Centers for Disease Control and Prevention (CDC), in 2016, around 20.4% of adults in the U.S. had chronic pain, and around 8.0% had a high impact on chronic pain. A similar situation is prevalent in countries such as China, India, and Brazil, where healthcare infrastructure is still evolving.

Mental disorders is expected to emerge as the fastest-growing segment over the forecast period, owing to the high prevalence of various mental disorders. According to WHO, in 2019, about 50 million people worldwide were suffering from epilepsy, making it a major health concern. Furthermore, depression, which is one of the most common disorders, affected about 264 million worldwide. Moreover, a growing number of clinical evidence on medical marijuana on mental disorders such as Post-Traumatic Stress Disorder (PTSD), anxiety, depression, bipolar disorder, multiple sclerosis, epilepsy, Alzheimer’s, and Parkinson’s disease is anticipated to further drive the segment growth.

North America dominated the market for legal marijuana with a revenue share of 88.4% in 2019. Factors, such as liberal government regulations and legalization of cannabis for medical as well as adult-use in the U.S. and Canada have supported the regional market growth. By 2019, the use of medical cannabis was legal in 33 states and territories of Puerto, Guam, and the District of Columbia in the U.S. Moreover, the introduction of the 2018 Farm Bill legalizing hemp and hemp-based products in the U.S. is a major factor enhancing the regional product demand. However, the legalization of medical marijuana in European countries is accompanied by stringent rules and regulations regarding the sale and cultivation, restraining the regional market growth. 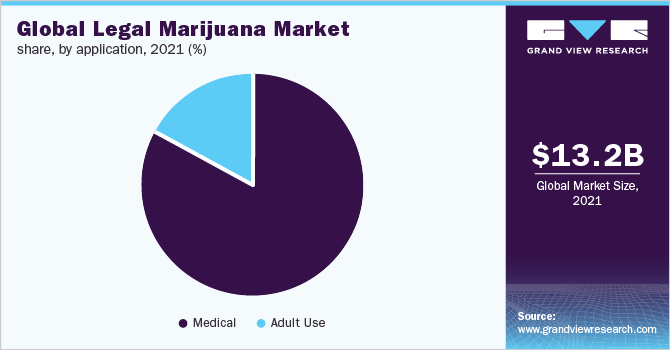 Other promising markets for cannabis are Australia, Germany, Poland, Colombia, Uruguay, and Israel. Israel is currently at the forefront of providing technology and knowledge transfer to the other world markets. Its vast knowledge in the agri-space has helped the country to develop new technologies for producing higher yields and new strains. Latin American countries like Uruguay and Colombia are working towards becoming the future suppliers in the global market and as the U.S. remains federally closed for export, these countries may seize these opportunities in near future. As the newer markets such as the U.K. and Thailand create their legal structure for cannabis, the revenue is expected to rise significantly. Moreover, countries like South Africa and New Zealand are discussing the legalization of medical marijuana and may emerge as viable markets in the forthcoming years.

Segments Covered in the Report

This report forecasts revenue growth at global, regional, and country levels and provides an analysis of the latest industry trends in each of the sub-segments from 2016 to 2027. For the purpose of this study, GVR has segmented the global legal marijuana market report on the basis of marijuana type, product type, medical application, and region:

Frequently Asked Questions About This Report

b. Buds dominated the legal marijuana market with a share of 51.7% in 2019. This is attributable to the fact that dried buds are generally used for smoking in order to alleviate chronic pain, to reduce the growth of cancer, and to stop the progression of Alzheimer’s disease.

b. Key factors that are driving the legal marijuana market growth include the high prevalence of cancer.

Cannabis-Infused Products and How to Transport Them